This is the first post in a series of three that will describe the energy crisis crippling New England and outline the framework for a realistic solution.  Let’s begin with three (hopefully) uncontroversial goals that all politicians, regulators, businesses, consumers, and non-profits can support:

(1)     Lower Costs: New England should lower its energy costs to become competitive with other areas of the country.

(2)     Increase Efficiency and Renewables: New England should accelerate its efforts on energy efficiency and use more renewable energy (e.g., solar, wind) for economic and environmental reasons, but also understand their limitations.

(3)     Eliminate Coal and Oil: New England should complete the retirement of its “at-risk” coal- and oil-fired electric generators, which will range in age from 42 to 68 years old by 2020, and are grossly inefficient, expensive, and harmful to human health and the environment.

If you accept these goals, the challenge of the current energy crisis is attaining them while maintaining an electric grid that can reliably supply power throughout the region.  The reality is, to make significant progress on any or all of these goals, New England must increase natural gas pipeline capacity into the region.

The Energy Crisis is Real and Will Persist

Because of man-made natural gas pipeline constraints, New England continues to pay the highest prices for electricity and natural gas in the lower 48.  The Energy Information Administration reported these electricity prices for 2014:

The following two charts from ISO New England, the independent regional grid operator, demonstrate how the highest natural gas prices in the U.S. lead to the highest electricity prices for New England. 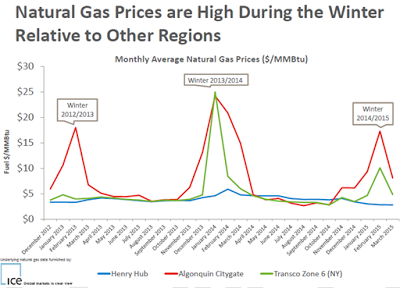 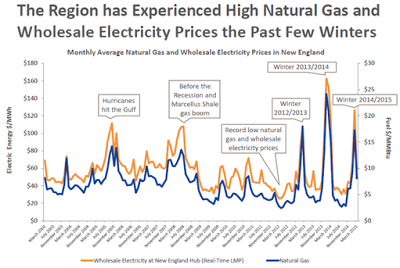 New England’s high energy prices equate to a multi-billion dollar annual “energy tax” on all New England consumers.  Actually, high energy prices are worse than high taxes, because your tax burden increases when you make more income, a phenomenon most would welcome.  In New England, high energy costs are imposed on all consumers regardless of their income and therefore disproportionately burden low-income families. While some consumers can conserve, they cannot simply forego electricity or heat.

“The total value of the energy market for the three months of winter 2013/2014 was nearly $5.1 billion; that compares to $5.2 billion for all 12 months of 2012, when New England consumers benefited from record‐low natural gas prices.”

ISO’s President and CEO also confirmed that the cause of escalating energy costs is insufficient natural gas pipeline capacity:

“There’s a distinction I want to make clear as we talk about pipeline constraints. There’s not a shortage of natural gas supply—there’s plenty of natural gas, in nearby states. The high prices come from the bottlenecks on the gas system. …While demand is growing, the pipelines bringing natural gas into New England have not expanded at the same pace. … Now, especially in winter, when demand for gas is extremely high for heating purposes, the pipelines are running at or near capacity just delivering contracted gas to [local distribution companies (gas utilities)]. Frequently, there’s no room left for gas for generators. That creates reliability risks on the power system. There are also price risks attached to these pipeline constraints.”

While other regions of the country tap their plentiful natural resources for energy, New England has never had indigenous natural resources capable of providing energy on-demand. However, with the Marcellus Shale at New England’s doorstep, New England should take advantage of its new geographic circumstance and construct additional natural gas pipeline capacity. 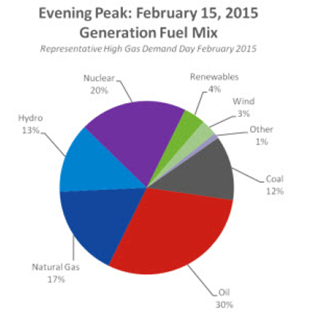 Contrary to the massive and growing body of objective evidence, some argue that the energy crisis “fizzled” this winter, without providing any viable solution to lowering costs.  First, we all know that in the winter of 2013-14, New England paid record-high electricity prices in January, February, and March, caused by record-breaking natural gas prices.  So, if you use that as a baseline of comparison, it’s going to be tough to get worse.  Unfortunately, New England came close, with February 2015 electricity prices reaching the third highest level ever ($126.7/MWh) and the highest in the country.  Natural gas prices averaged $17.27/MMBtu, while other areas of the country paid about $3.  Because natural gas was unavailable or too expensive on the constrained pipeline system, New England relied on oil and coal for 26.2% of its electricity in February and at times over 40%, driving up costs and regressing on its important climate change goals.  For reference, the annual contribution from coal and oil in 2012 was only just over 3%.  ISO, along with the six New England Governors, perceive this as a crisis: “The economic, system reliability, and environmental consequences of inadequate energy infrastructure require action.  Cost-effective investment in new natural gas infrastructure and the continued integration of clean energy resources are important to resolving these challenges.”

The continuing energy crisis was New England’s reality despite the occurrence of a series of fortuitous events outside of New England’s control.  In an authoritative winter assessment, ISO attributed reliability and lower price volatility to five factors: (1) the 2014/2015 Winter Reliability Program; (2) the weather; (3) liquefied natural gas (LNG);  (4) oil prices; and (5) energy efficiency.  Of these five factors, only energy efficiency is a market policy within New England’s control.  Let’s discuss how each of the other factors involved luck and/or is a bad bet for New England.

New England cannot sit back and hope for warm weather, low global oil prices, and LNG deliveries, while maintaining a Winter Reliability Program that is providing a lifeline to the region’s aging and inefficient oil-fired generators. New England has the opportunity to act decisively and take control of its own energy future by supporting additional natural gas pipeline capacity now—before the problem solves itself through a mass exodus of people and businesses.